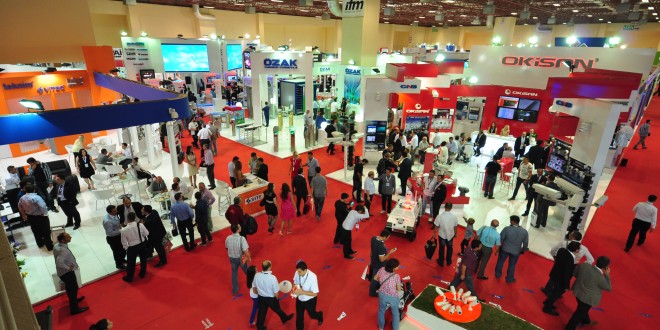 IN ISAF, WHICH HAS BEEN ORGANIZED 23 TIMES IN THE PAST 21 YEARS, THE MAIN TARGET FOR THIS YEAR, ONCE AGAIN IS “GROWTH”…!

ISAF 2019 will Take Place in October

Being the only domestic organization of the sector it covers and the largest activity of the region where Turkey is located, ISAF is being held for the 19th time at Halls 9-10-11 at Istanbul Expo Center on September 17-20, 2015.

Our exhibition which we have been holding in 5 sub-exhibitions under the main theme of ISAF with the concept of “Total Security Solution and Comfort” since 2012 is, thanks to this structure, now among the largest international held domestically. Having achieved, following this change which had been planned long before and was put into effect in 2012, a great growth of 63% which is rarely seen in the exhibition sector, ISAF also achieved a growth that befits its reputation in 2013 and 2014. Maintaining a fast pace of growth, ISAF aims at a growth rate of 30% in 2015.

In order to let ISAF whose halls do not suffice as a consequence of this growth preserve its pace of growing, we are executing reorganization in our exhibitions in 2015. We have separated “Fire, Emergency, Search & Rescue and Occupational Safety – Occupational Health” as independent exhibitions and reorganized ISAF as

We expect ISAF to grow by approximately 30% in 2015 as the area allocated to the exhibitions has enlarged thanks to this reorganization. Allocating area to the sector companies whom we couldn’t assign any area in 2014 although they requested to participate and allowing them the opportunity to make use of the trade volume created by ISAF have been an important factor in our decision to execute this reorganization. As a result of the increased area capacity due to the division of ISAF into 2 parts, many new companies that could not participate in our exhibitions and the companies that plan to enlarge their allocated space and conduct their exhibition more comprehensively will have the opportunity to participate in our exhibitions.

While not many exciting differences were experienced at the exhibitions in previous years as products that were already in the market and used everywhere were mostly exhibited, this situation has changed greatly since 2011. A notable part of the participants have begun to exhibit in ISAF the rollouts, first release of the products that will make tremendous impact and innovations that will give them leverage against their opponents. Our “Perspective of the Future” motto has been actualized in a more consolidated way in 2014 as ISAF has become an area where products to be used in the next period are exhibited.

Being unquestionably the only activity where developments, changes and progression in the sector are followed especially by the product – service providers and the buyers – users in the sector, ISAF is strengthening every year its position as the information center of the sector with the activities it covers. We observe and are informed that the activities which develop and grow every year and we carry out making use of the accumulation of knowledge that we derive from holding exhibitions and also publishing the only magazine of the sector, a&s Turkiye, are followed by all the participants with much liking and interest.

Having maintained a steady physical growth since the first it was held, ISAF also grows every year in terms of quality. ISAF that had mostly domestic visitors until 2010 has been visited by noteworthy buyers from abroad since 2011. As it is easily observed via the interest we encountered during our operations, we anticipate that the number of foreign visitors which increases every year will present a higher rate of increase in 2014 in comparison with the previous years.

We look forward to seeing you among us as participants in order to make use of the trade volume that becomes more exciting as ISAF continues to grow.