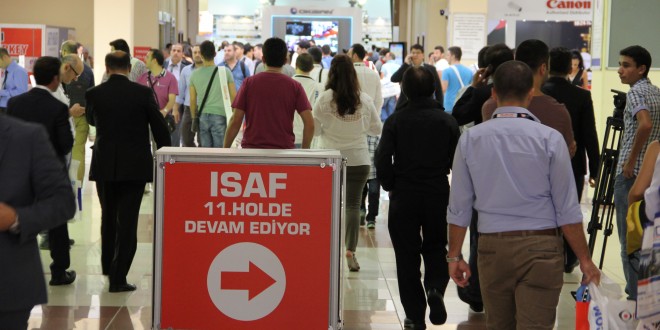 THE ISAF EXHIBITION ENDED WITH AN AMAZING FINAL DAY

The ‘Number One Exhibition’ in the territory of security technologies, International ISAF Exhibition has closed following the final day which enjoyed a large number of exhibitors, display of a broad range of products and exciting exhibition events in order to welcome its visitors again next year. Business volume and commercial activities were observed to be dense during the exhibition, and it is understood from the questionnaires and interviews that exhibitor companies from security and other related industries were satisfied with the organization of the event as well as with the extensive commercial transactions they made.

Not only a major meeting forum for the security industry, but also on the way to become a major brand with its influence and significance in the organization territory, the 19th International ISAF Exhibition took place on September 17th – 20th in Istanbul Expo Center (IFM) in halls no 9, 10 and 11. Housing any kind of products and technologies related to security, the International ISAF Exhibition also expanded its scope as an exhibition with sub-titles such as security systems, security of information technologies and smart building automation systems and was organized in such way to benefit various stakeholders in the industry such as buyers, dealers, distributors, integrators and end users with its specific product display.

Not only organizing exciting activities such as stand shows, performances and surprise gift lotteries, but also informing the visitors with training seminars, conferences and panel discussions and making a difference in the industry, the International ISAF Exhibition was evaluated by Selma Yilmaz, Corporate Communications and Marketing Coordinator of Marmara Fair Organization, who said “ISAF has a cheerful atmosphere for the exhibitors and visitors in addition to its busy and dynamic atmosphere. Executives, employees, professionals of the industry, academicians, governmental employees, end users and others… All enjoy being here. That is the very reason why we call ISAF the ‘festival of the security industry‘. It is very important for everyone to make a positive start in the new business season in both tangible and intangible terms, and it is important for us to be able to promote that. I’d like to thank to all who are a part of the picture and who contributed to its creation”.